Last October Safetyboat Services was asked to assist with a boat to act as safety cover for a channel crossing. Not really news I hear you say, what if I was to tell you it was for a pair of Landrovers. 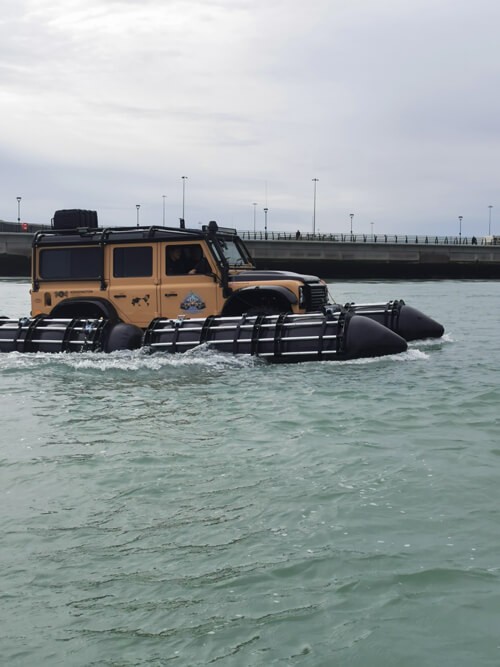 Jeff Willner and Steve Boultbe-Brooks are a pair of adventurers who are attempting to drive from London to New York the hard way.

Our job had problems from the start, on leaving Lowestoft the safety boat we had planned came up with mechanical problems. With the crossing planned for a couple of days away we had to come up with a solution and fast, in came our secret weapon, our recently aquired Atlantic 21. Neil and Barney made their way to Dover to meet the team while one of our other team hitched the Atlantic to our Hylux and headed south. 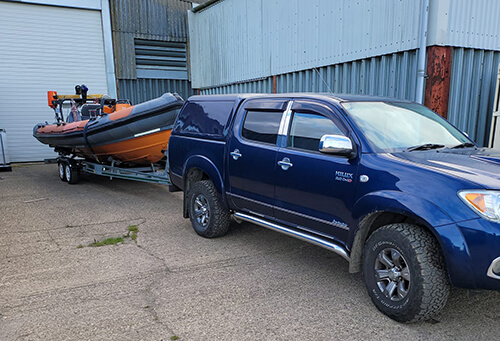 Once on site we launched the boat and commenced assisting with the Landrovers on the slipway. 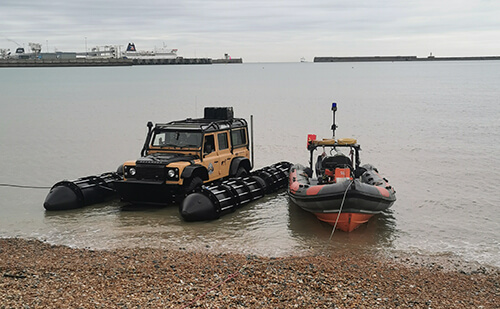 Part of our job was to get clearances from the Port which included the Dover port Police. Yet another problem, the person we arranged to sort this for us didn’t. We had a visit from a port representative along with the Police who advised us no one had spoken to them at all, even though we had been assured this had been done. After much negotiation along with insurance and risk assessments sent we had approval.

The trial around the harbour and into the western entrance, eventually went well. One of the rovers broke a drive train but was fixed fairly quickly and as the sun set both vehicles, accompanied by the Atlantic made for the entrance of the harbour.

By the end of the day everyone was both tired and elated, a quick beer followed by a steak meal and a relatively early night ready for the crossing day was in order.

The day of the crossing didn’t start as planned, the forecast had underestimated the wind and sea state, we had put a limit on the crossing to be 20kts and 1m of sea as this would be a first proper open water trip. On looking out of my bedroom window at the flags on the sea front I thought that didn’t look 20 kts.

After breakfast we called Dover VTS who advised there was a steady 26kts from the North gusting to 32. The crossing was off however rather than waste the day we decided to do some more trials in slightly worse conditions which would give them an idea when it comes to crossing the Bearing Straits.

Off we went, we took the Atlantic out into the entrance of the harbour and calculated the tide and swell, 2m of swell along with a strong Southerly tide made of a bit of a fun time. Unfortunately as the vehicles only had a top speed of around 7 to 8 kts that left very little room for error. 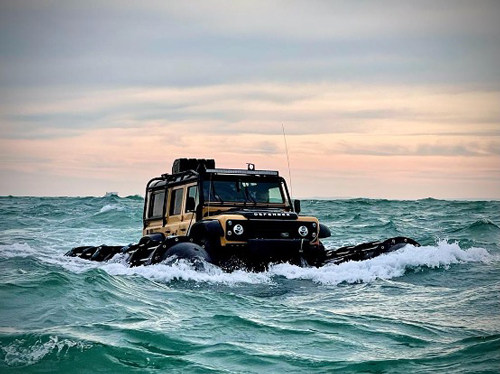 As we supervised the quickly drifting Landrover we spoke to the 2nd vehicle and asked them to proceed back into the relative safety of the harbour just in time for the 1st drifting rover to break his steering cable,

Under tow we got clearance from VTS to take it back through the Eastern entrance to save time.

“Suddenly Jeff’s Defender started going in circles – another snapped steering cable. The SBS support team charged across the wild seas to get us on tow, out of the path of an oncoming ferry and into the calm harbour.”

“The English Channel presented some challenges but with the help of Neil and his team at Safety Boat Services (highly recommend!), we were towed back to shore safely.”

We headed back to the marina and moored the vehicles along with the Atlantic back up, it was decided that we had done everything we could and we would call it a day, Barney even had a chance to drive the Landrover around the harbour on the way back. 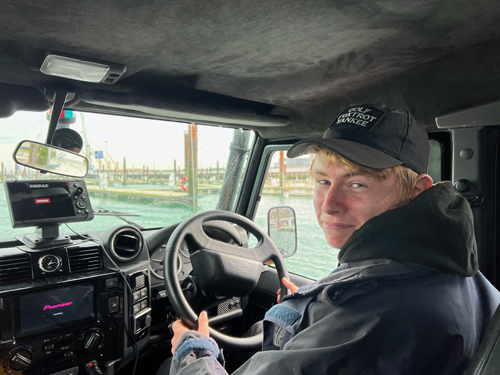 The vehicles are currently crossing Russia and China en route to the Bearing Strait with a 3rd vehicle coming to us soon so that our engineering team can develop a more robust propulsion system in conjunction with Clements Engineering.

A guide to RIBs

Which RIB is best for commercial charter?

Request a Call Back